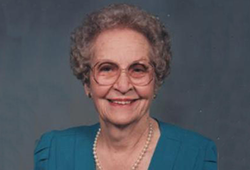 Norma Schaefer was a lifelong Lutheran who lived a productive life for nearly a full century. She and her husband, Otto, were married 62 years. They had no children. For many years they operated a successful business in Dallas. After Otto's death in 1992, Norma chose to use their God-given assets to benefit the Lord's work here on earth. Through Lutheran Foundation of Texas she established both an endowment and a charitable trust. The trust paid income to Norma during her remaining lifetime. After she went to be with the Lord in 2011, the trust and a bequest from her estate augmented the permanent endowment. The endowment's assets then established the first endowed chair in English literature at Concordia University Texas (CTX). Following its inaugural distribution, then-CTX President Dr. Tom Cedel wrote these words: "We remain thankful for this gift and the role Legacy Deo is playing in managing and distributing these funds to support our efforts in English and through all things to continuously glorify our Lord."